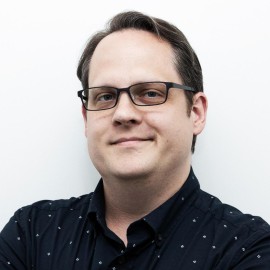 Andrew is a software engineering manager with over 20 years of experience in the tech industry. He has a diverse background and a solid understanding of both software engineering and team leadership. Over the years he has worked with a wide array of programming languages and technologies as well as teams of all sizes. He enjoys public speaking, teaching, and working with customers.

Andrew began programming at the age of 10 and has always enjoyed working with computers. In university he majored in linguistics with minors in computer science and English. His honors thesis focused on natural language processing, machine learning, and semantic analysis. His first masters degree was in software engineering, which provided him with practical knowledge in software architecture, process management, requirements gathering, quality analysis, and other topics around the daily work of engineering quality software. His second masters degree was in theology, which provided him with both theory and practice in mentoring, coaching, family systems theory, public speaking, effecting organizational change, team building, and other skills that are helpful when managing people and organizations.

As a Software Engineering Manager at Indeed I lead and manage a team of software engineers who are working to help people get jobs.

The system my team works on serves more than 150 million requests a day across multiple geographically distributed data centers.

In addition to overseeing the daily operation of the division, I oversaw both short and long term planning, set expectations and deadlines, defined objectives and key performance indicators, met with stakeholders, customers, and external vendors, and communicated status to senior management and other divisions.

Aug 2018 – Jul 2019 Tokyo, Japan
In my role as Head of the Ground Systems Engineering I led and managed a team of hardware and software engineers who were designing, coding, and assembling our internet connected ground systems. In addition to overseeing the daily operation of the division, I oversaw both short and long term product planning, set expectations and deadlines, defined objectives and key performance indicators, met with stakeholders, customers, and external vendors, and communicated status to senior management and other departments.

Dec 2017 – Aug 2018 Tokyo, Japan
I led and managed the team that was working on our internet connected groundstation hardware. This involved overseeing all groundstation development, performing research and development, writing code in Go (Golang), providing leadership and mentorship for the engineers on my team, working closely with other teams to maximize productivity, gathering requirements, performing functional testing with both simulated and real hardware, and reporting our current status to stakeholders.

I helped customers with issues and questions related to their use of MongoDB. Most of the customers I worked with are software developers or system administrators and as such the technical difficulty of the questions that were asked was generally quite high.

I was also the subject matter expert in sharding and distributed systems for the North America support team. In this role I worked with product management, trained other employees, and produced customer facing materials including presentations and knowledge base articles.

I led a team of software engineers who worked on various internal systems related to The Boon Group's business as a third party insurance administrator. These systems were written in C# and ran on the Microsoft Windows platform with SQL Server databases.

I also developed code in C# as needed. Some of these applications were web based systems with SQL Server databases, some were standalone or console applications that ran back-end processing.

I worked on Kabam's distribution infrastructure. This included things like payment processing, business intelligence, account management, and customer loyalty. In this role I worked on systems running on several different stacks and written in several different languages. Server stacks included Scala/Play talking to MongoDB, PHP talking to MySQL, and Java talking to MySQL. Client stacks included web clients in Ruby on Rails, PHP, Java, and Scala/Play (including HTML, CSS, and Javascript work) as well as native clients for Android (Java), iOS (Objective C), and Unity3d (C#). I also worked on the RESTful APIs that sat between these various components and wrote SDKs for Android, iOS, and Unity3d which were integrated into existing games by internal and external game developers.

As part of this work I also gave training sessions on various technologies and components, wrote user facing documentation, and interfaced with developers in the US, Canada, and China. I also travelled to Beijing to provide in-person support to our developers there.

May 2012 – May 2013 Austin, Texas, USA
I was a Ruby and Java back-end and middle-ware developer working on the StrongBox product line.

Oct 2011 – May 2012 Austin, Texas, USA
I worked on a balanced scorecard application in Java using the Spring MVC framework, Hibernate, and the Dojo JavaScript toolkit.

Mar 2010 – Oct 2011 Austin, Texas, USA
I worked on Texas Mutual's underwriting and online systems in Java and RPG IV utilizing Websphere Application Server, TIBCO BusinessWorks, and DB2 running on the IBM i platform, as well as other technologies as needed.

The University of Texas at Austin

May 2008 – Feb 2010 Austin, Texas, USA
I worked on various applications for the linguistics department.

Aug 2007 – Apr 2008 Austin, Texas, USA
This was an early phase startup where I was only the second developer brought onboard. I worked on custom modules for the Drupal content management system in PHP and contributed patches back to the mainline branch.

Aug 1999 – Dec 2005 Austin, Texas, USA
I developed various software components in Java and Perl for the customer support organization, including web interfaces, middleware, database integration, metrics generation tools, and internationalization tools. I oversaw the internationalization process for the software support website, working with translators and language testers in seven countries. I also maintained a lab of around 20 servers, including systems running Linux, AIX, and Solaris.

All the recent interest in COBOL due to its use in large financial systems is fascinating. Just because a language is old doesn't mean …
Apr 19, 2020 5 min read Programming, COBOL

After taking a hiatus for two years, I've started working with ARM assembly language again. I realized that the code I had been working …
Last updated on Nov 22, 2019 16 min read Programming, ARM, Assembly, Algorithms

I got a Raspberry Pi for Christmas and I've been teaching myself ARM assembly. It's my first time working with assembly language, as I …
May 13, 2016 3 min read Programming, ARM, Assembly, Data Structures

A MUSH Written in Racket (Scheme)

I've been working on a project for the past couple days to learn the Racket programming language. Racket is based on Scheme, which is …
Sep 3, 2013 1 min read Programming, LISP

Every now and then I have an editing task for which Eclipse is just not up to the job. Usually it involves making a lot of changes all …
Aug 20, 2013 2 min read Programming, Regular Expressions, Vi
See all posts 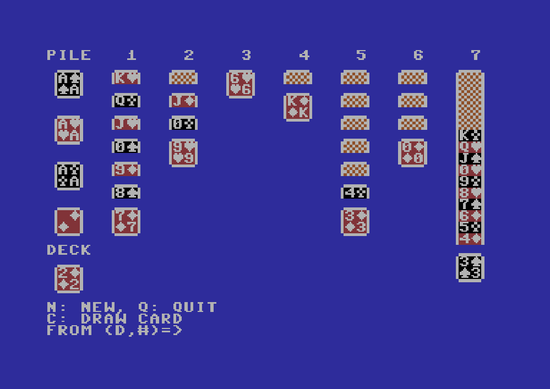 A solitaire card game for the Commodore 64.

The Effect of Selectional Preferences on Semantic Role Labeling

The aim of this paper is to explore the effect that selectional preferences have on the accuracy of semantic role labeling systems in a …
Andrew C. Young
PDF Code Dataset Poster Video Source Document