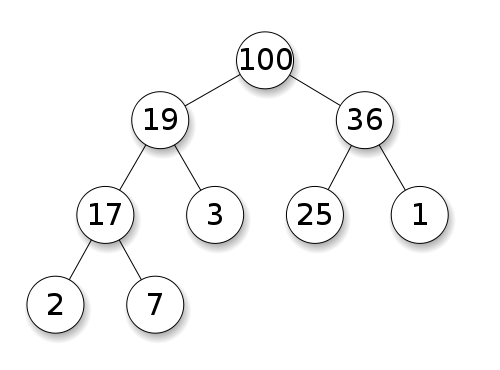 I got a Raspberry Pi for Christmas and I've been teaching myself ARM assembly.

It's my first time working with assembly language, as I didn't take an systems architecture or OS fundamentals class in college.

I'm slowly working on a Huffman Encoder, trying to use only native Linux system calls without making calls to other external libraries.

This will be the first in a series of posts about this topic.

The posts probably won't be very long, the stuff I'm doing isn't revolutionary, so there's not a lot to discuss.

Today I'm here to talk about binary heaps. When I learned about binary heaps in my data structures class I didn't really understand the usefulness of them. I knew that you could use them to implement heapsort, and to make priority queues, but because they're simpler than red-black trees and other binary search trees, they can't be used for easy ordered traversal. Working in higher level languages I never really had a need to implement a heap for anything.

However, I am now in need of a priority queue, and I am trying to work in a static memory footprint because I'm trying not to allocate any additional memory beyond the initial memory footprint of the application. Suddenly binary heaps make a whole lot of sense. (Before you ask, yes, I did realize afterwards that I could solve the same problem using the same space and time complexity with a binary search tree, which is what I will implement next.)

The code I wrote to work with heaps is designed to be used for a priority queue. As such it stores a 2-word (64 bit) value in the heap. The first word (32 bits) of the value is the “key” or “priority”, used to sort the entry within the heap. The second word (32 bits) is the “value”. The value is actually optional, so one could use this same code for sorting an array of integers, for example, although with a few tweaks it could be made more more efficient for that purpose. Also, when removing an element I ought to swap it with the last element rather than just copying the last element into the first spot. That would make the algorithm effectively do a heapsort out-of-the-box. Maybe in v2. The code also stores the current size of the heap and the maximum size of the heap in the first two words of the heap's memory space so that those values don't need to be passed around by hand.

I am still learning assembly, but hopefully someone will find this useful.